UPDATE: The Mathers Museum of World Cultures has created a virtual visit of the Shipibo Indian exhibition! Experience this truly unique exhibit via your device!

Experiential learning is a hallmark of ISI and a cornerstone of the school’s universal full-continuum International Baccalaureate (IB) curriculum. This commitment led teachers Frédéric and Bernadette Allamel to apply for a grant from the Lilly Endowment some four years ago, securing funds that would ultimately put their ISI students at the center of co-curating their own museum exhibit.

Echoes of the Rainforest: The Visual Arts of the Shipibo Indians is now on display at the Mathers Museum of World Cultures on the campus of Indiana University in Bloomington, Ind. A public reception formally opened the exhibit on Saturday, April 20.

Following a passion she developed after first encountering an exhibit on Shipibo art in 1979, Bernadette Allamel traveled to the Peruvian Amazon with her husband Frédéric and daughter Camille with the support of the Lilly Endowment in the summer of 2015. The goal of the trip was to interact with the Shipibo Indians and, most importantly, collect artifacts that highlighted the culture and artwork being created on a daily basis by the native Peruvian people.

Following the Allamel’s two months of immersion in the Shipibo culture, living in a small hut and traveling by boat, they returned with over one hundred examples of textiles, ceramics, clothing, jewelry, and paintings that were created by and for the Shipibo. Bernadette even spent one-on-one time with Shipibo women, who taught her the steps of traditional ceramic making.

“Being immersed with these people and learning how to create ceramics from Delia, a woman in the community, was an unforgettable experience,” Bernadette said. “Witnessing the creativity and beauty of the Shipibo people was very special, and we are pleased to be exposing more people to this unique culture." 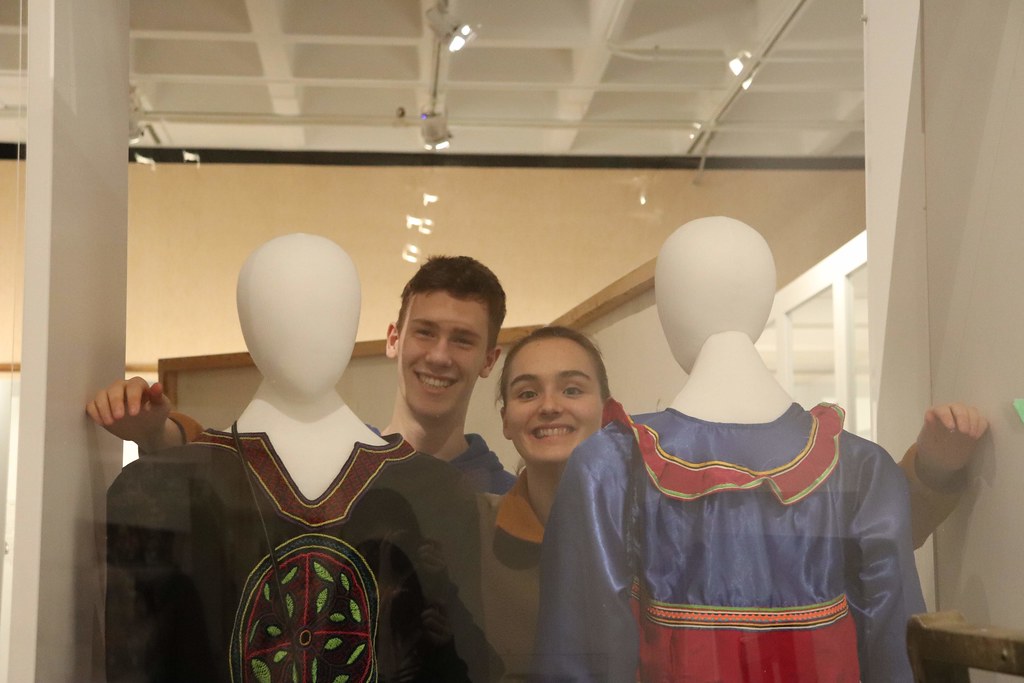 HOVER OVER IMAGE TO VIEW SLIDESHOW

Work to develop the Echoes of the Rainforest exhibit began in earnest with the start of the 2016-17 school year. With ISI social and cultural anthropology students taking a leading role, measurements and photographs were taken to prepare the Shipibo artifacts for their eventual move to the Mathers Museum, a stay that will last through December 22, 2019.

Spanning multiple grades and including some students who have since graduated from ISI, the project’s development took advantage of the many elements that make ISI curriculum and programs the most distinct in the Midwest. As examples, a bilingual exhibit catalog was developed to support the show, and students used their IB learners’ skills of inquiry to understand the process of curating artifacts.

“I enjoyed the entire translating process because it was a very intellectually challenging task that required serious concentration and time,” Grade 12 student David Hoppmann said.” “I very much appreciated the amount of thought that I had to put into it, as well as the way in which it let me create a bridge between two linguistic sides of my identity.”

“We are very proud of our students, who always impress us with their desire to learn and experience,” Frédéric says. “And, it has been one of my great teaching experiences to share this project with them and now with the Central Indiana community in partnership with Indiana University.”

READ AN EXHIBIT REVIEW BY THE INDIANA UNIVERSITY PROJECT PARTNERS

The Mather’s Museum of World Cultures is open Tuesdays through Fridays and on Saturday and Sunday afternoons. To see their full schedule and read about the other exhibits currently showing alongside the ISI Shipibo artifacts, visit the museum’s general information page.

To celebrate a successful end to the second unit, families were invited to join their students in a variety of activities, including song recitals, presentations, and other hand-on activities to support and celebrate their student’s learning. To learn more about the PYP in the classroom, view Pre-Elementary and Lower School at ISI.

The International Baccalaureate, or IB, is a worldwide education program designed to provide students with an education fit for a globalizing world. The IB stresses the importance not only of academic achievement but also personal development in the classroom. With immersion and dual language programs in French, Mandarin, Spanish, and English, the IB develops worldly thinkers. Here are the top five reasons ISI recommends pursuing an IB diploma.

On November 1, ISI grade 1 students traveled to Jennifer’s Forest and Joyful Learning Nature Center to spend a day outdoors, exploring nature and completing activities for their second Unit of Inquiry: “Sharing the Planet”. The central idea of the "Sharing the Planet" unit focuses on using natural resources in a useful way and teaches students what natural resources are and how we can use them responsibly.

With a large portion of the team graduating during the pandemic and half of the team having never played before, the High School Volleyball team had a season of rebuilding. The athletes worked together, acquiring many match wins and experiencing small victories as a group